“Standing upright on the peak of the world we once more hurl our challenge at the stars!”

These are the closing words of the Futurist Manifesto published by Filippo Tommaso Marinetti on 20th February 1909 in the French daily “Le Figaro”. The piece violently shocked the Paris art and literary world. Modernity was exalted in all its aspects: speed, energy, revolutionary scientific discoveries. Paris was the new launching platform for young artists from all over the world: Spain, Italy, Russia, and Germany. Marinetti, whose culture was French, was often in paris in those years. In 1910 Picasso’s and Braque’s first cubist compositions hearalded a period rich in experimentation. The echo spread throughout Europe. On the wave of enthusiasm Marinetti led ‘his’ artists on an actual tour, organising shows in the main European capitals. With his great communication skills he got the manifesto published in a numerous foreign newspapers, very efficiently spreading the new message as far as Russia.

I didn’t write about the art for a long time, but this one definitely draw my attention. Last week I was visiting Scuderiedel Quirinale and the exhibition called: Futurismo Avantguardia which presents debut of futurism and the extraordinary correspondences and oppositions in the early avant-gardes up to the outbreak of the First World War.

It is interesting that this exhibition divided into 10 sections within the space as curated in collaboration with the Centre Georges Pompidou in Paris and the Tate Modern in London. It was set up first in Paris (Oct.2008-Jan.2009), then now in Rome and lastly in London (June-Sept.2009).  At one spot, in parallel you can see the stylistic and philosophic contributions made by Futurism and Cubism to the birth of Russian Cubo-Futurism, English Vorticism, and American Synchromism, underscoring th basic contribution of the Italian avant-garde with Marinetti‘s insight concerning a new synthesis of space and time.

If you are in Rome in April and May – don’t miss this exhibition. Below is one of my favourite artworks Ciclista, by Natalia Goncarova, 1913. 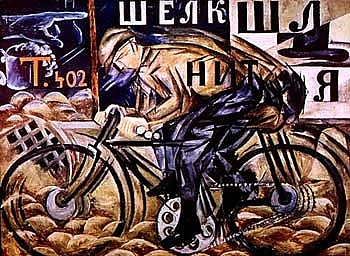